It’s a funny feeling, seeing somewhere you recognise on-screen. But when you spot somewhere you know well, it’s incredibly exciting!

We never get tired of seeing 10-11 Carlton House Terrace as the backdrop to exciting blockbuster productions. Over the years, our historic London filming location has made appearances all across TV and film, from period dramas to panel shows, charity broadcasts to Hollywood blockbusters.

During these last few months, we’ve hosted a number of film and photo shoots and it’s got us reminiscing about some of those we’ve been a part of over the years. We’re pretty confident you’ll have already seen our Westminster Townhouse on your screen. The question is, where did you see us?

This popular BBC drama has been a cult favourite ever since its debut in 2010 featuring household names like Benedict Cumberbatch and Martin Freeman. The exterior of No. 10 was used in both series 2 and 3 as the facade for the Diogenes Club – a gentlemen’s club co-founded by Sherlock’s brother, Mycroft Holmes, and frequently featured in the original Sherlock Holmes novels.

In series 2, episode 3, John Watson is summoned to the Diogenes Club by Mycroft to discuss pieces of evidence in the hunt for Sherlock’s nemesis, Moriarty (below)

Our gorgeous filming location for hire makes its second appearance in the one-off fantasy episode set in the Victorian era during series 3 – The Abominable Bride. Whilst the exterior of the Diogenes Club remains the same for this historical episode, its interior is different to better reflect the period.

Staring Helena Bonham Carter, Wings of the Dove is a romantic drama set in 1910 where the protagonist, Kate Croy, must choose between money or the man she loves. With twists from beginning to end, an opportunity presents itself that may allow her to have it all.

Our historic London filming location was used for a couple of scenes in this classic. What is now the Council Room had its walls completely re-styled for the shoot (below) in order to keep in line with the film’s wider appearance. (Source) 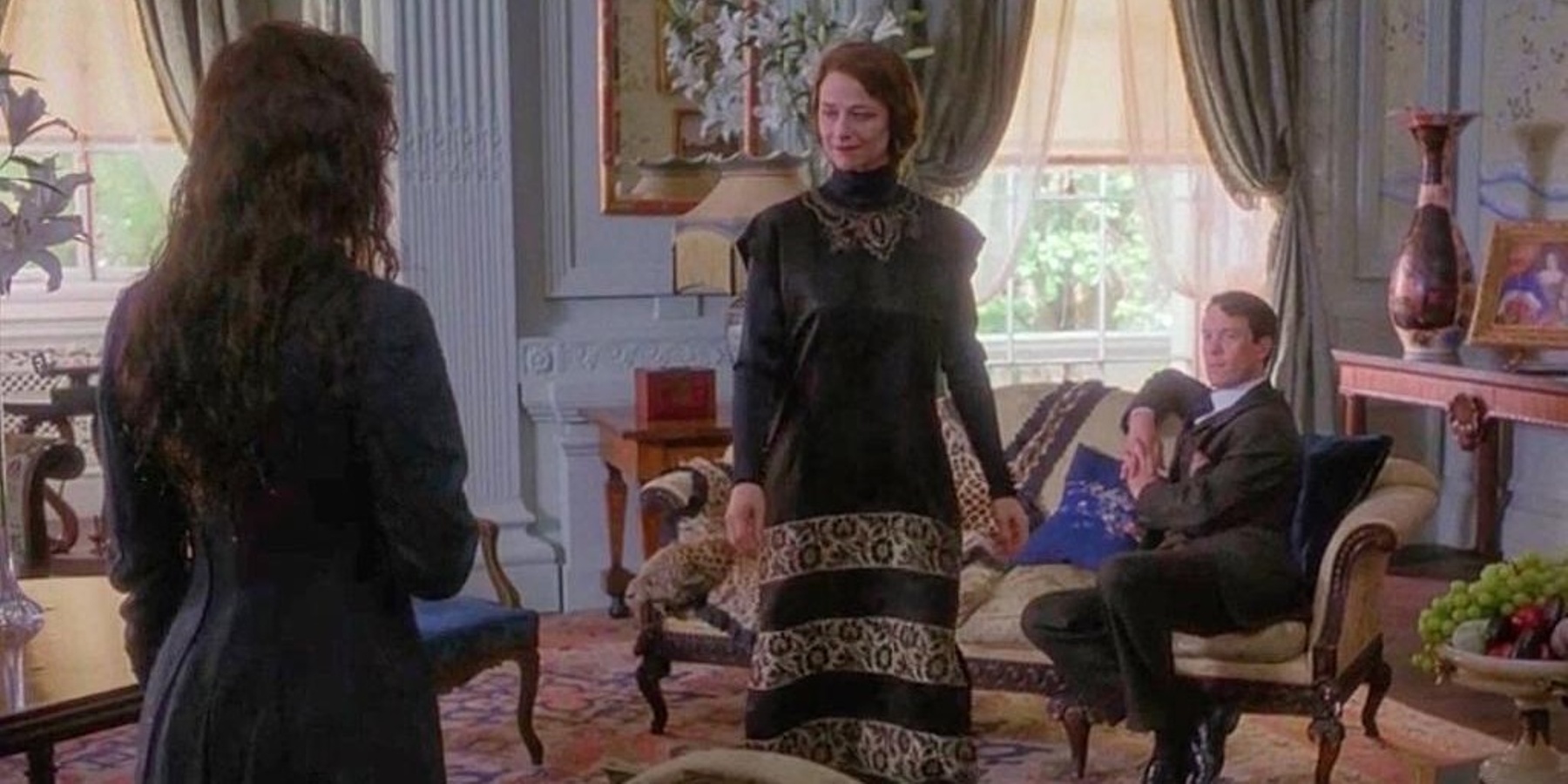 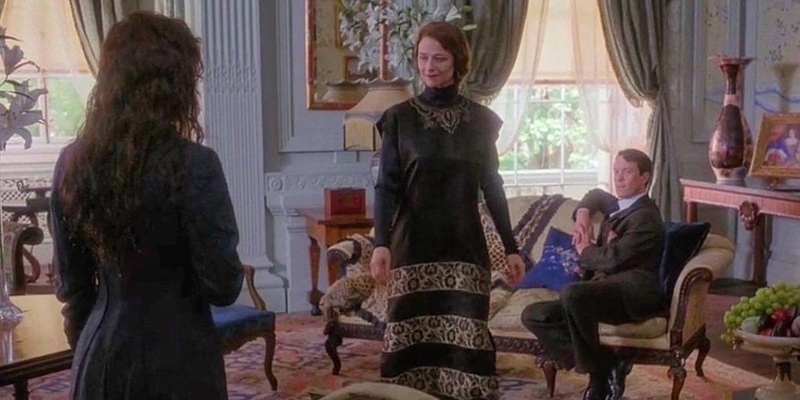 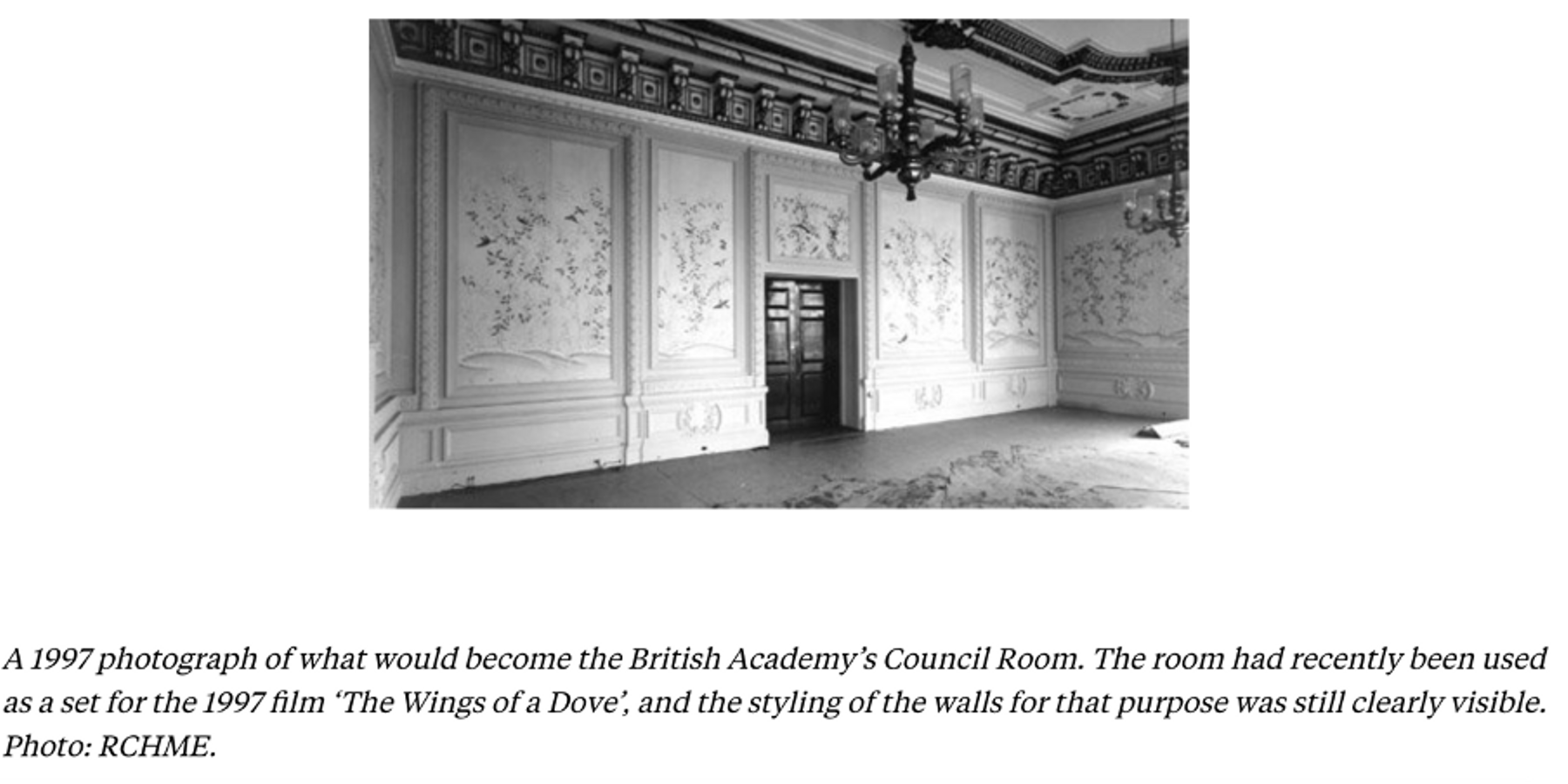 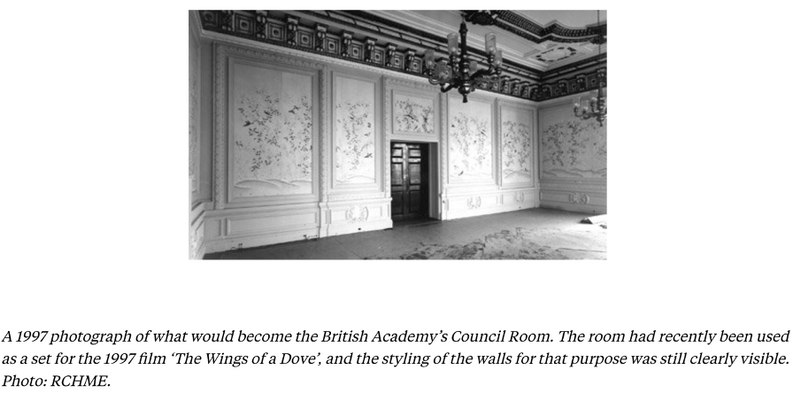 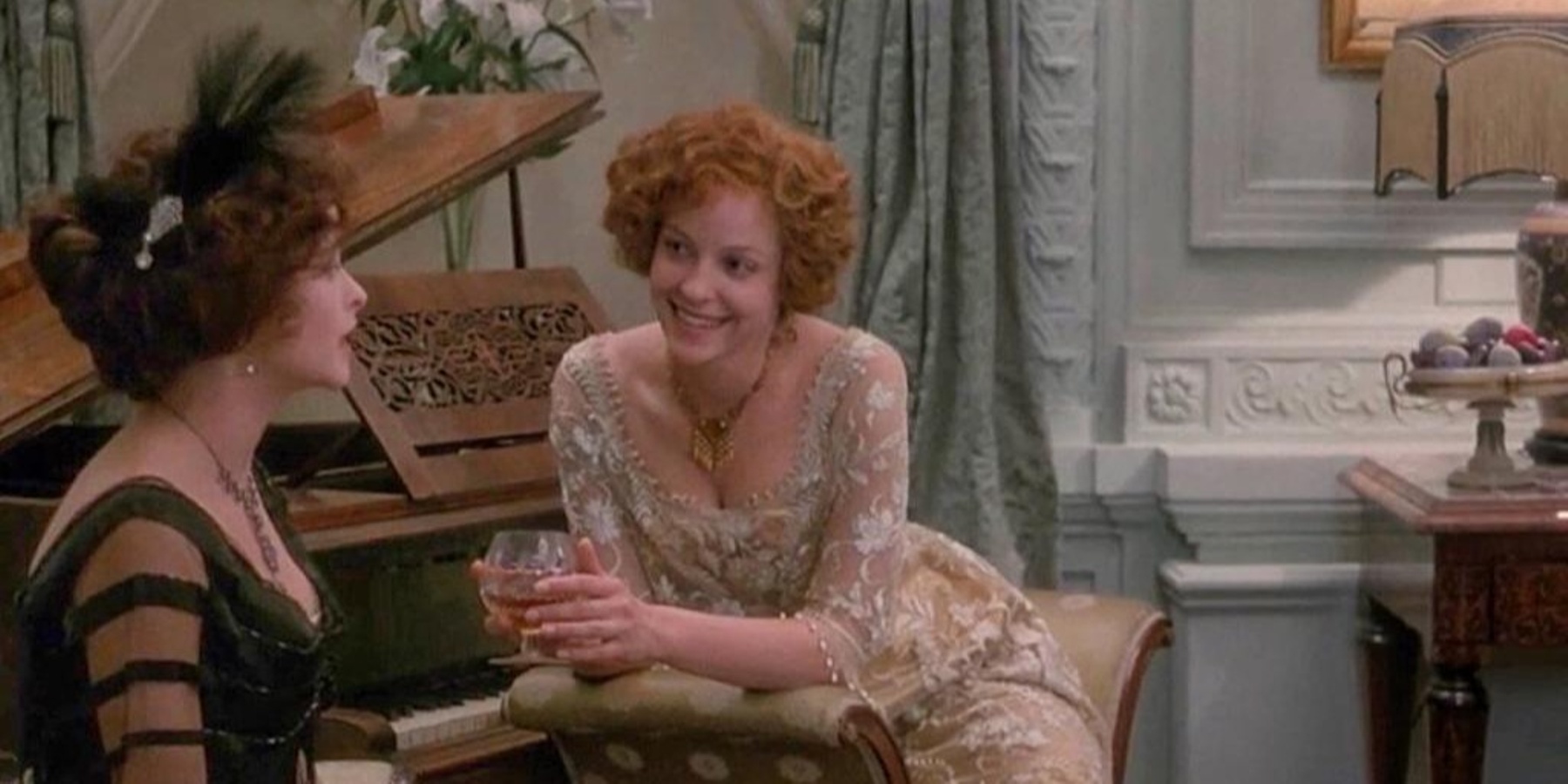 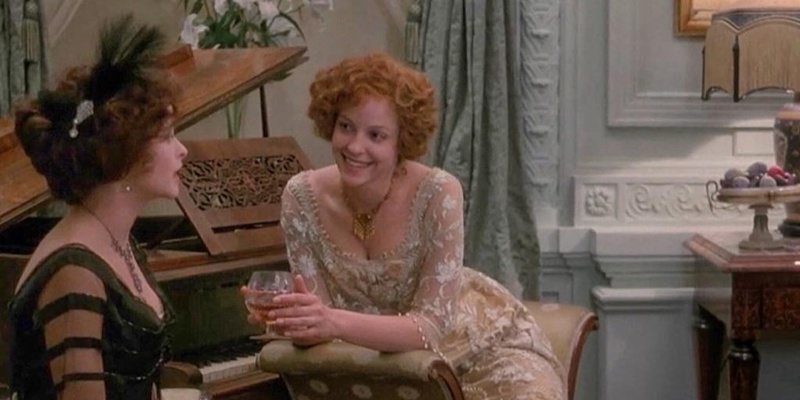 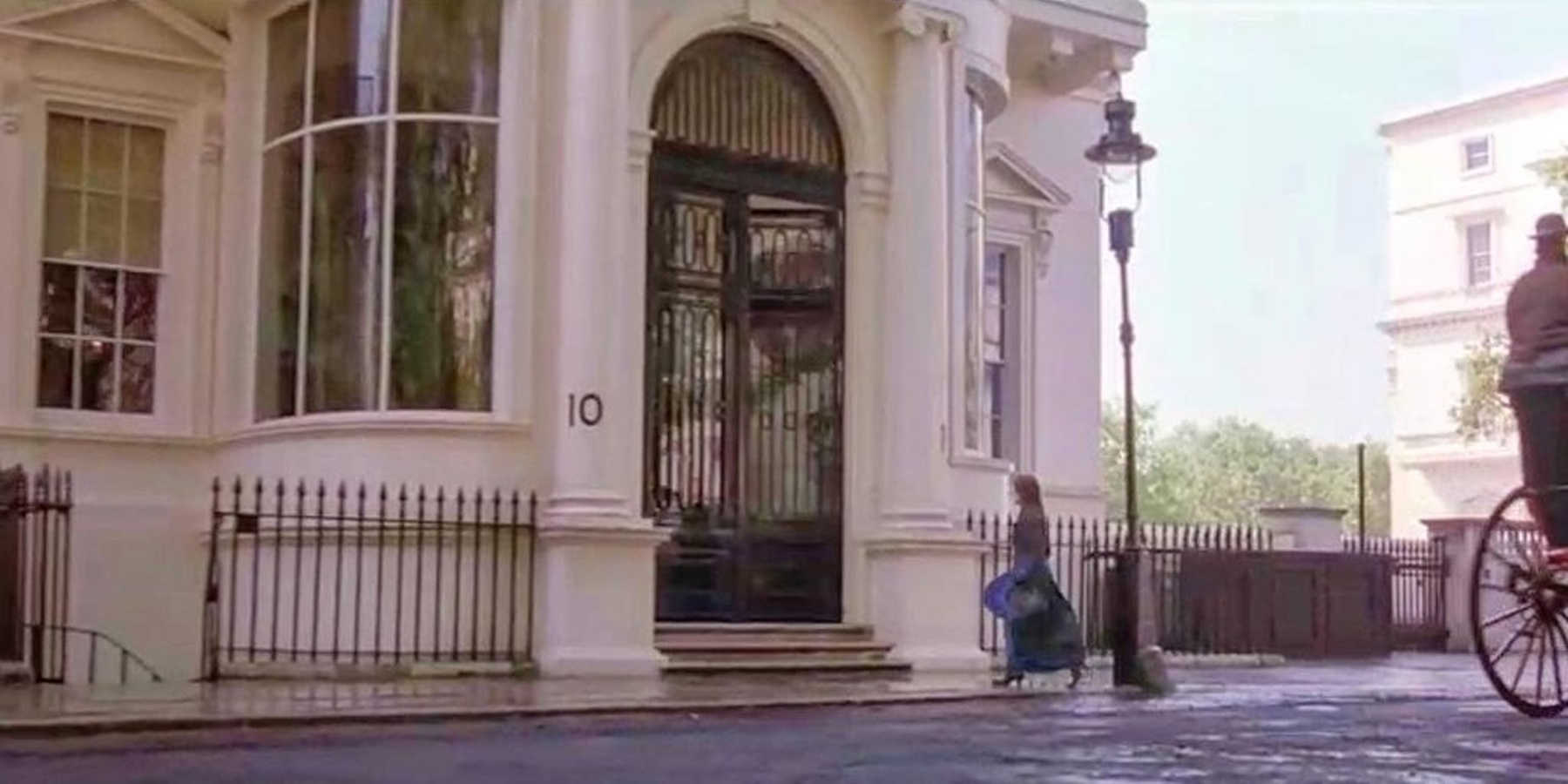 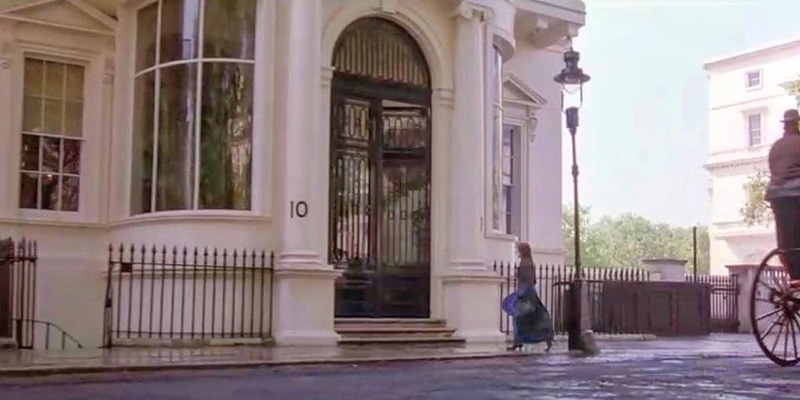 The film also utilised our unique, black marble staircase in the lobby of No. 10 for a scene that sees Helena Bonham Carter swoop down them. You might have noticed in the film that the stairs are notoriously white, not black. This is because the stairs were painted white specially for this scene! See if you can spot it at 21 seconds in.

With household names such as Claire Foy and Olivia Coleman taking the prestigious role as Her Majesty, the show holds nothing back, whilst delivering an accurate and engrossing portrayal of modern history. 10-11 Carlton House Terrace has been lucky enough to make it into two episodes of The Crown (to date).

Making its debut in series 2, episode 6, our venue appears as the German Embassy where Wallis Simpson, playing the Duchess of Winsor, is seen handing over state secrets. Whilst the Marks Room and Council Room were used for filming, this scene is interesting as it is shot externally looking in through the windows.

The second appearance is later on in series 3, episode 1. This time, our historic Townhouse is the members club where Sir Anthony Blunt is arrested after it is revealed he is a spy feeding military secrets to the Kremlin. For this scene, only the exterior of the building is featured as it is used as the façade of the club where he is removed and taken for questioning. 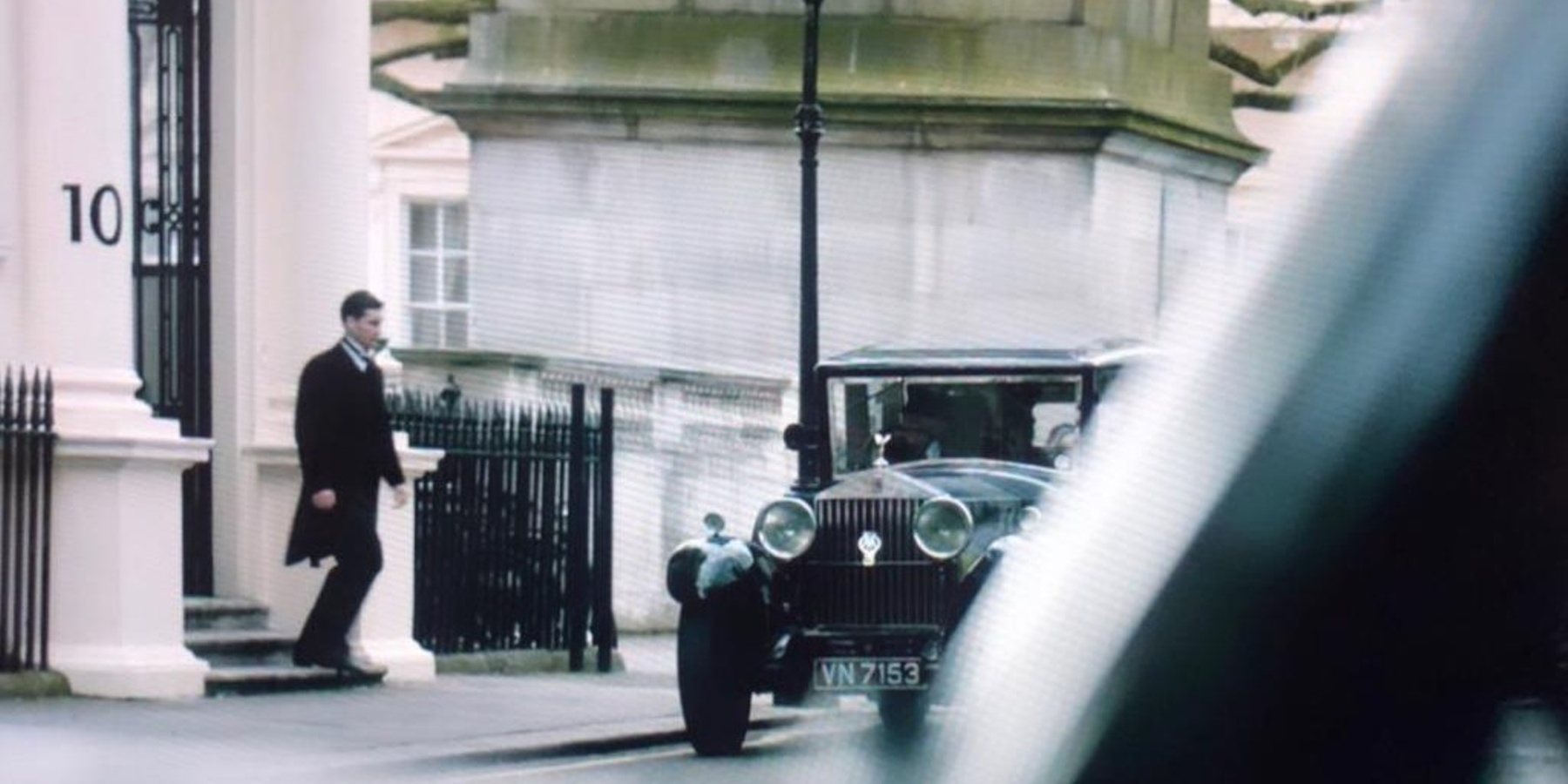 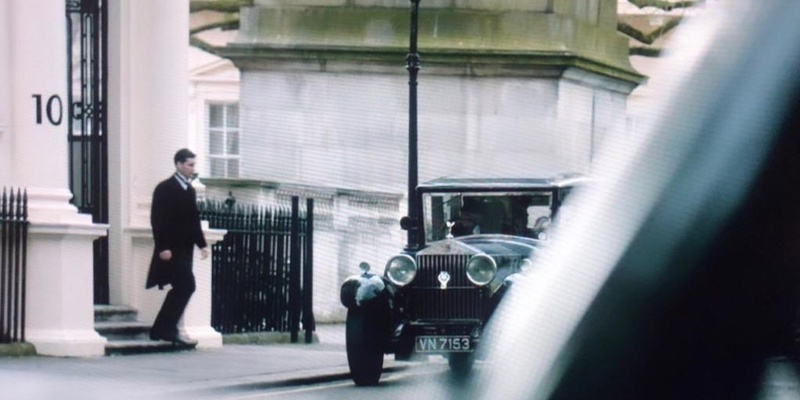 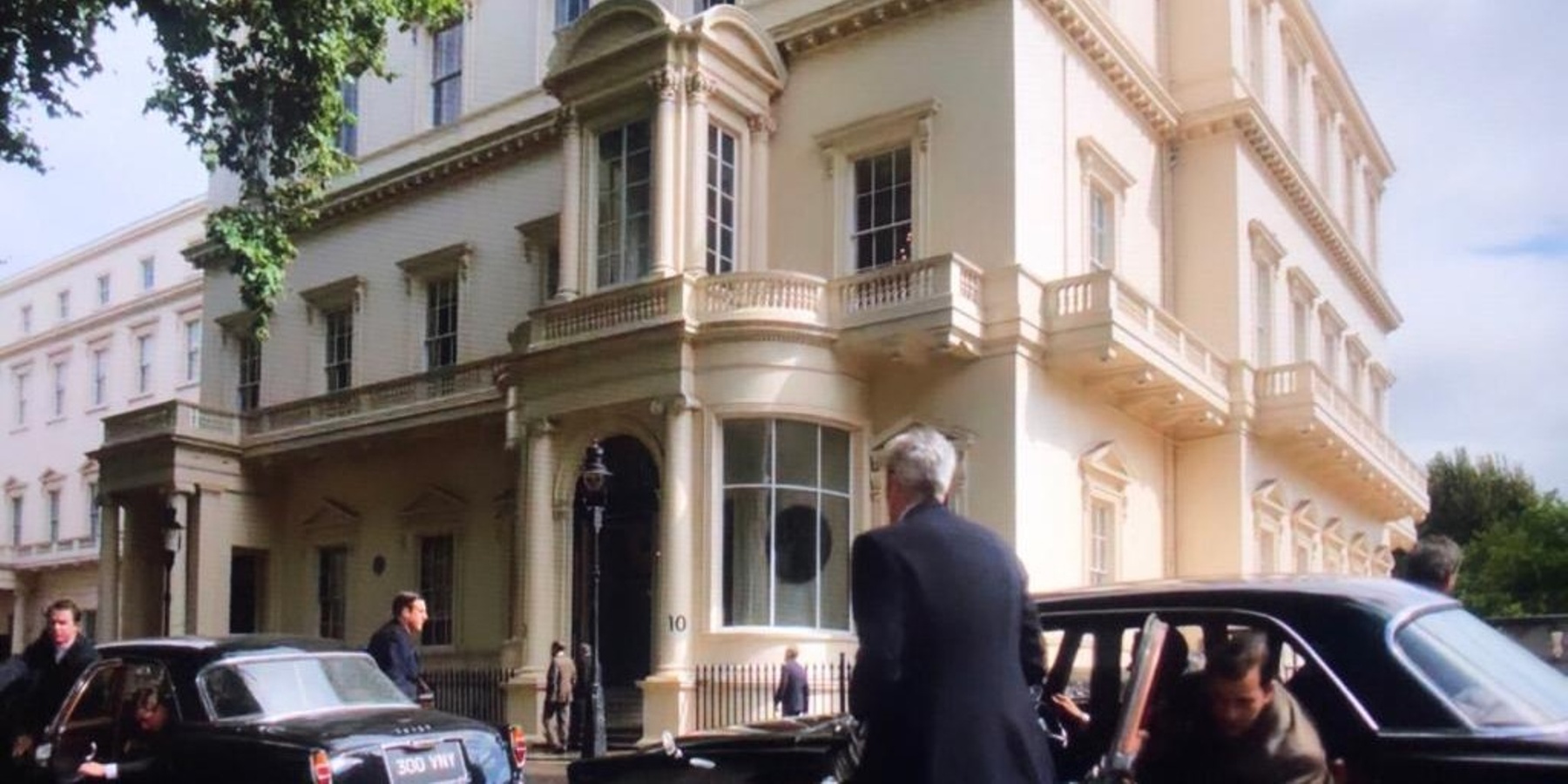 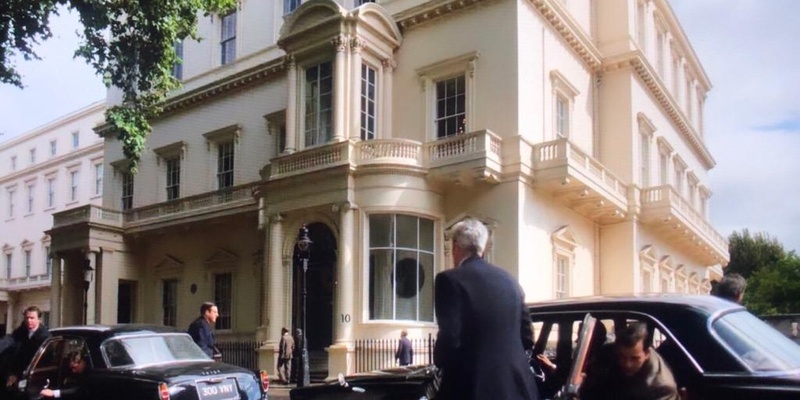 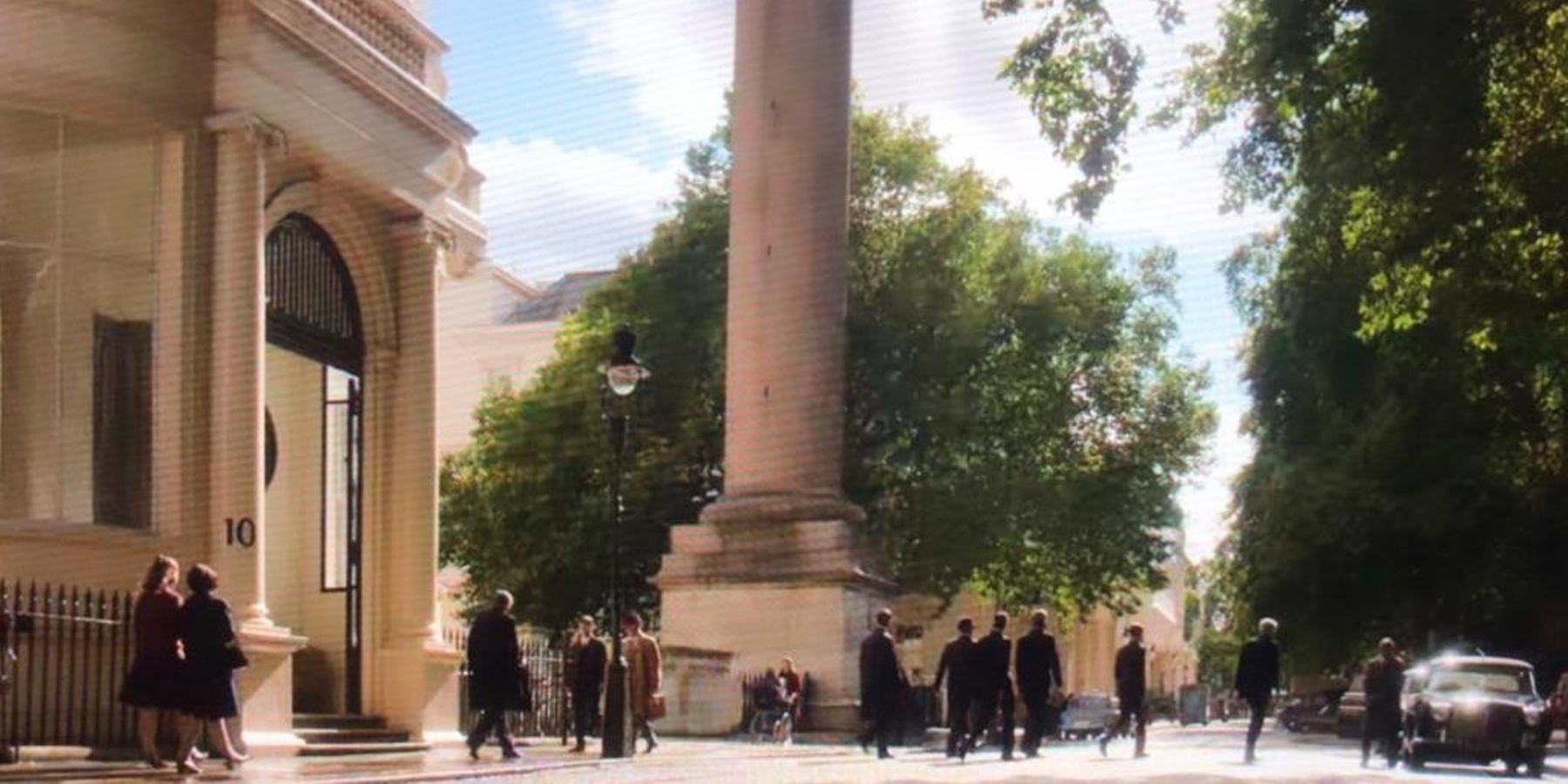 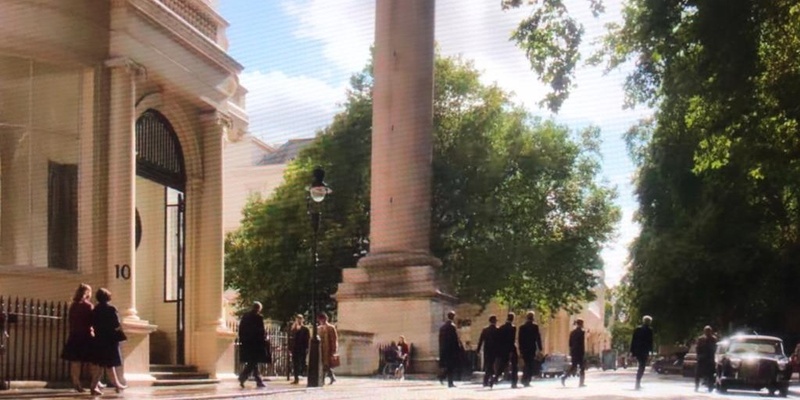 There’s Something About Movies (Sky One)

The most recent production on our list, Sky One’s There’s Something About Movies has returned for a third season, airing 21st Oct 2020.

Lead by Alan Carr and featuring Jenifer Saunders and Michael Sheen as team captains, this gameshow is all about movies – trivia, spoof film scenes and or even just poking fun at their own work. We can’t tell you exactly which episode you’ll be able to spot our townhouse filming location, but we’re sure you’ll notice the grand backdrop when you see it!

Whilst the interior and exterior were both used, the main action takes place outside as the cast tried to recreate the famous scene where Joaquin Phoenix dances down the steps in The Joker.

Inside the venue, one of the lifts were used as part of the shoot too. The crew and cast used our Reading Room for hair and make-up as well as behind-the-scenes activity. Fun fact: the talent was required to do their own hair and make-up for this shoot! You might even catch a glimpse of this in the final cut…

The Golden Globe and Emmy nominated BBC series, Bodyguard, was given an alternative ending for Comic Relief in 2019. Whilst the original episodes may have had viewers on the edge of their seats from start to finish, this reimagined finale definitely diffused any tension that might have been left over.

The high-stakes, political thriller was taken in a different direction in the alternative ending, and we can’t think of a better setting for it than our grand central London Townhouse. It was a lot of fun to host the crew and stars Joanna Lumley, Richard Madden, Keeley Hawes and more.

Utilising the ever-popular combination of our Music Room and Council Room, we think the Comic Relief team pulled it out of the bag with their clever and uh... unexpected ending.

The 25th instalment of the Bond franchise is one that has been highly anticipated - not least because of the need to postpone its official release worldwide, twice! Currently, the spy film is set to be released in cinemas on the 2nd April 2021. Our fingers are crossed that it goes ahead this time as we can’t wait to see it; and only partly due our gorgeous London filming location making a cameo.

We can’t disclose exactly how and when 10-11 Carlton House Terrace is included in the upcoming Bond film, but by now we’d hope you know it when you see it! You’ll have to catch Daniel Craig’s final Bond performance when it’s (finally) released…

One of Disney’s latest creations, Cruella is a revisionist take on one of their own classics: 101 Dalmatians. The title is included in Disney’s quickly growing catalogue of live action remakes, joining other classics such as the Lion King, Beauty and the Beast, Aladdin and more. However, rather than recreating the original 101 Dalmatians, Cruella will instead be a prequel to 1961 classic and an original in its own right.

Emma Stone is cast as the equal parts infamous and glamourous villain, while Emma Thompson plays the Baroness who acts as the antagonist to Cruella, largely responsible for her fiendish transformation. Again, we can’t share exactly where 10-11 Carlton House Terrace pops up in this hotly anticipated prequel but keep an eye out when the film is released on the 28th May 2021.

Filming Venue for Hire in London

If you’ve been on the hunt for that perfect location for your next shoot, you might just find it at 10-11 Carlton House Terrace. Historic, grand, elegant and versatile; we’ve hosted shoots for all manner of productions and genres.

We’re also proud to say we hold the UK’s official ‘Good to Go’ accreditation through demonstrating our venue is completely COVID-secure. We adhere to all the most recent government guidelines and also hold the AIM Secure mark awarded by the Meetings Industry Association. You can find out more about our safety measures on our Coronavirus page.

Learn more about our filming venue for hire or if you have questions the venue team would love to hear from you. Contact them on 020 7969 5224 or drop them a line at info@10-11cht.co.uk.